On Tuesday I had a fabulous day exploring London with my friend Danielle (her blog is WelshItalianDiaries on WordPress, check her out!).

I’ve always wanted to visit Buckingham palace and do the state room tour. The palace isn’t open all year round, but it opens in the summer months from July – September every year. During this time The Queen spends her summers away from the palace at one of her other residences, Balmoral in Scotland.

Everyone that knows me well will know how much I really adore the Queen and am a total royalist… I can’t explain why – I Just am!

I’d advise you to prebook tickets online, it works out slightly cheaper than buying tickets ‘on the door’ but if you plan on just buying tickets on the day then you will be greeted with masses of crowds who want to do the same!

We bought our tickets online which gives you a print out receipt which you must take with you. You then collect your official ticket from the ticket office which if youre looking directly at the front of Buckingham Palace, is located on the left hand side. You’re told to arrive at gate A,B or C at the time of your tour, and you will then be let in to a waiting area where you will wait fro around 10-15 minutes before going through an airport security style area.

You’re asked to turn phones off, and unfortunately you cannot take photographs in the palace at all. At first we were a little disappointed by this, but it’s an understandable security measure.

Entry times are at 15 minute intervals. Our tickets were priced at £24 which I believe was worth the money completely.

If your’re expecting to be greeted by regal oppulance, gold guilded walls, giant chandeliers and the epitomy of sterotypical royal granditure, then that’s exactly what you’ll discover. You’re given a headset which will act as your guide throughout the tour, which is very informative and easy to use.

The hallways are lined with grand paintings of former monarchs, and other impressive, shiny oil artworks. There are several grand staircases to glide through, and some recognisable rooms too.One of my favourite state rooms to visit was the ballroom. This is the primary venue used for investitures when people receive their honors of OBE’s, MBE’s and so on. The room was large and grand, the floors were carpeted with a deep royal red which mirrored the walls, and a corridor lined by chairs and benches led up to the platform where the Queen would stand to present the nominated investee with their gifted medal prize.

One thing to note is that you don’t get full reign of the palace. This is because it is a working residence and there are private apartments within the palace that will never be open to the public, for example the Queen’s private quarters such as her bedroom etc. This is due to security but also privacy reasons. However, you still get to visit over 19 of the state rooms. See their website for details. (Link at the end of the blog post.)

Another room which I enjoyed was the exhibition which housed hand selected artworks by Prince Charles. The new exhibition at the palace was put in place as part of the Prince’s 70th birthday celebrations that took place earlier this year. The exhibition was a mix of modern and historic pieces, including paintings, sculptures, mosaics and textiles housed in a (thankfully very cold air conditioned) ball supper room.

The final part of the tour brings you to the main garden which is where the Queen’s summer garden parties take place. This very recognisable scene and was recently photographed at Prince Charles’ 70th celebrations when he and The Duchess of Cornwall as well as The Duke and Duchess of Sussex attended a garden event, which was their first public appearance since the Sussex’s wedding on 19th May 2018. 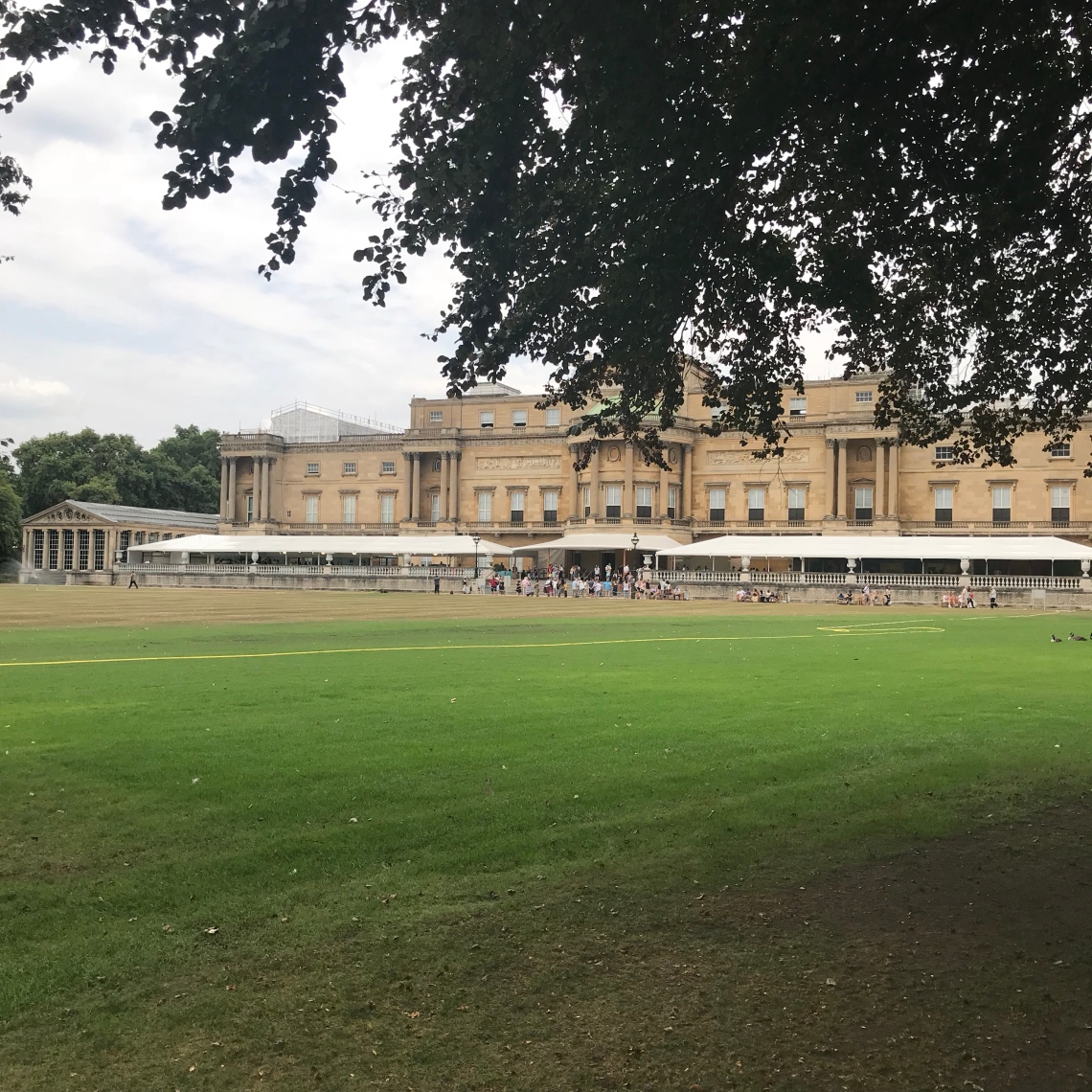 I was determined to take away some Buckingham Palace souvenirs on this trip, and a magnet was at the top of my list. Me and my family have started collecting magnets on our travels to document the places around the world we’ve travelled. I know a lot of people do this too but I just really realllllly wanted a Palace magnet to comemorate finally doing the tour! I also picked up a purple tote bag and a small navy canvas bag. 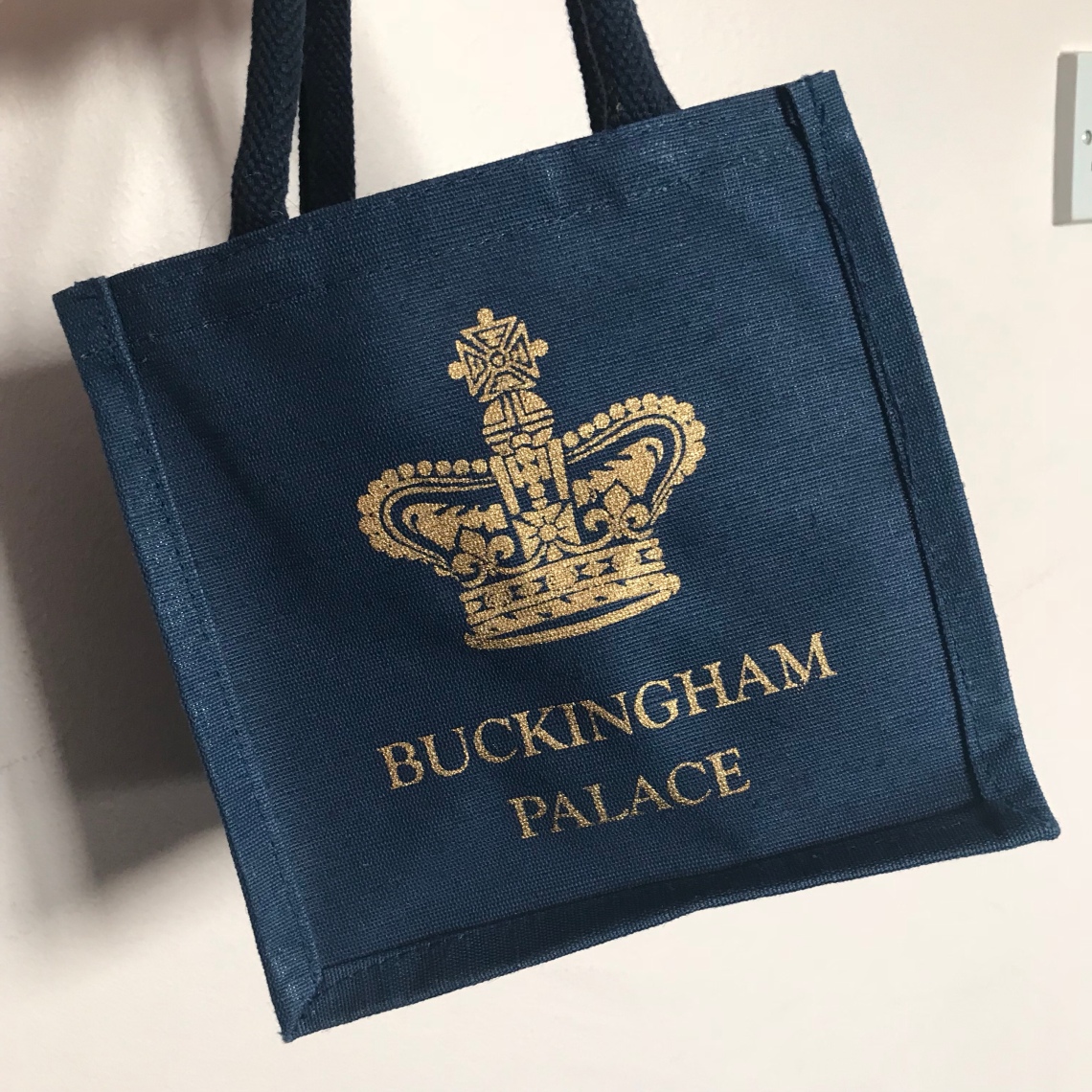 The gift shop is situated just a stonesthrow away from the main building. It is a temporary shop which wasn’t ‘naff’ in anyway, and it was quite amusing to see how people were going crazy over cuddly corgi’s and tea towels too. The person in front of us at the till spent nearly £200 on souveniers, whereas I spent around £12!

Before entering we had about half an hour of time to fill, so we decided to hang around outside the front of the palace. On things that we noticed on our trip that a lot of the memorable, famed London buildings were being renovated or touched up and Bucking Palace was no exception. Unfortunately for us, this meant that we couldn’t take a full length photo of the building without yellow cranes being in the way.. but we just avoided these!

We managed to get a good look at the changing of the guard at the front of the building.L which was really great to watch.

One thing I noticed a few years ago was that the lights and poles that line The Mal leading toward the palace have guilded crowns that sit on top. Have a look around the castle and its surrounding areas and you’ll notice these too.

All in all, I really enjoyed my visit to Buckingham Palace, and It was just what I imagined it would be. The tour didn’t take very long, potentially around 2 hours or so, but it really depends on how long you spend admiring the graditure of this historical place. My friend Danielle really enjoyed it too, and she doesn’t adore the Royal family as much as I do. It’s a lovely place to visit and what tops it off is the cafe at the end of the tour, where you can over look the garden and enjoy tea and a scone, cake or lunch. I’d highly recommend the tour to anyone who is considering it!